Simon Storage (Inter Terminals) wanted to build a brand new import, storage and distribution hub for Hydrochloric Acid at its terminal based in Seal Sands. Having worked with Abfad Limited previously in providing lining and monitoring systems for some of their other storage tanks they approached and held discussions with North East based Abfad in April 2011. They discussed the application of Abfad’s innovative double skin tank lining system, Fuelvac®, to see if the system could be applied in a 14.8 metre diameter x 13 metre high tank that would be used for the storage of over 2 million litres of hydrochloric acid at the Seal Sands site.

Abfad Limited specialise in protecting above and below ground storage tanks from the problems that are associated with corrosion including bacterial corrosion caused by bio-fuels. Applying specialist solvent free coatings that encapsulate the steel of the tank internally, once coated the tank will be protected from corrosion and with the Fuelvac® system can also be fully monitored.

Fuelvac® is a double skin lining system developed and patented by Abfad Limited that can be applied to both above and below ground storage tanks. This system not only protects the tank from any internal corrosion, as steelwork is coated and therefore cannot physically corrode, but also allows for 24/7 vacuum pressure leak detection monitoring. With today’s environmental pollution laws and the protection of valuable assets a major concern, double walled installations and tank monitoring are becoming more and more crucial. If an internal breach does occur in a Fuelvac® protected tank then the client is immediately alerted and can plan inspection knowing that the stored product is fully contained and safe. In most instances an internal breach of the double skin liner can be fully repaired and operational again with minimal down time. This results in no environmental clean-up costs and no expensive tank replacement or repair. Because the tank is monitored 100% of the time this reduces the need for inspections and Non Destructive Testing, enabling better managed operations running simply, effectively and efficiently at all times.

The Right Coating For The Job

The first obstacle faced on the Simon Storage (Inter Terminals) project was to locate a coating which would be fully resistant to hydrochloric acid. Abfad specialise in using solvent free coatings as these tend to offer greater long term protection, and because they don’t contain any solvents they don’t break down over time. Solvent free coatings are also friendlier to the environment, personnel and the public. These are hot spray applied using a specialist plural component heated spray pump and sprayed to the required thickness.

Abfad Limited went to several of its resin suppliers and discussed two potential coatings that would offer suitable protection for the tank. Abfad then made some free film resin samples to be immersed in the acid to physically test the resistance of the selected coating. Both the resin manufacturer and Simon Storage (Inter Terminals) agreed to test the samples over a two year period. After which time it was deemed that the tests had been successful for the chosen coating and it was resistant to the hydrochloric acid. The coating that Abfad decided to use after testing for this project was a 3M SkotchKote epoxy, as this was found to offer the greatest protection.

Abfad Limited was commissioned to review the project and formulate all engineering aspects to be able to double skin the tank floor areas and importantly up to the top of the wall sections. Abfad’s research team reviewed all aspects of the project, including the weight of the double skin materials, and developed a method to ensure that the 13 metre high wall sections would be fully secure during the installation process and after the double skin liner was fully installed.

With all research and planning done the installation process was ready to begin, the client emptied the tank, cleaned and de-gassed it and the structural integrity of the tank was established through Non Destructive Testing. Abfad then arranged scaffolding, which consisted of six lifts and a dance floor at the top of the tank, in order to gain access to blast the underside of the tank lid.

Another critical aspect of the project was to section off the tank into six separate zones each with its own vacuum monitoring instrument gauge, this was to allow for more precise monitoring of the tank. To enable each area to be separate Abfad over lapped their double skin system, which they believe to be a first performed in the industry. Once the first wall zone was double skin lined and terminated back onto the original coating, Abfad’s personnel then applied the next wall zone section which was overlapped onto the existing zone double skin, ensuring each zone remained a separate entity and could be independently monitored with vacuum pressure within each interstice. The walls of the tank were split into four separate sections in this way, with all zones over-lapping onto the previous zones double skin. The floor section was split into two zones using the same method as the wall sections. In this way the tank had six separate areas of monitoring, each with its own Endress+Hauser vacuum instrument gauge, which was linked back to the client’s control room.

At each stage and with every zone, sign off was completed only when the zone could hold its vacuum and there was no doubt in regards to pin holes or any defects. Commissioning consisted of visual inspection and holiday detection (spark testing) of every inch of the tank coating onto the original steel and again after the coating was applied to the double skin materials. Testing was performed several times on each zone, before sign off and prior to the tank being handed back to the client.

Due to the highly corrosive nature of the hydrochloric acid all pipe connections to the tank were reviewed and protected and the tank hatch was internally coated to ensure there was no area of the tank that could potentially be a leak path due to any corrosion of the steel.

The project was a complete success with the tank coming into use and storing the product in August 2014. With no problems reported and all zones monitored within specifications both Abfad and Simon Storage are delighted with the outcome of the project.

2. Formulate all engineering aspects to be able to double skin the entire floor section of the tank and 12.5 metres up the side walls.

3. Blasting of the entire tank to SA2.5 standard.

6. Double skin sectiopned into 6 overlapping zones to ensure precise monitoring of the tank.

7. All pipe connections to the tank reviewed and protected and hatchway internally coated to ensure no leak paths remained in the tank. 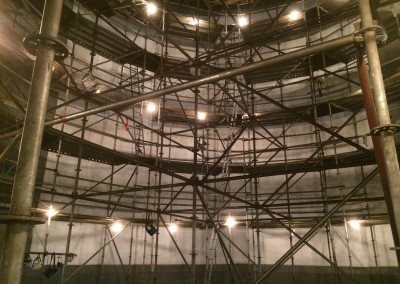 Scaffold inside of HCL tank

Inside of HCL tank after double skin installation

Monitoring gauge outside of HCL tank

Detail of monitoring gauge outside of tank

2 of the 6 gauges around outside of HCL tank

Click Here to View Presentation
We use cookies to ensure that we give you the best experience on our website. If you continue to use this site we will assume that you are happy with it.I acceptI declinePrivacy policy